Can These Things Record Music? 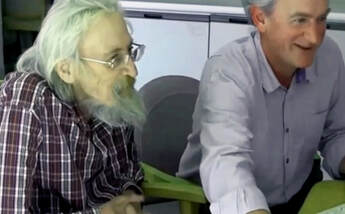 Trevor and I at ‘Moose in the Hoose’, Silverlea in 2012 photo Dr Val Bissland
I met Trevor Morrison in Silverlea Care Home. Trevor was a real man of mystery, he had an enquiring mind so that every week he’d ask to Google some obscure subject, often to do with religion. I’d find an interesting article and print it out. Trevor would take it away and study it and the following week he would have another topic to investigate.

It was at one of those sessions in September 2006 Trevor asked ‘Can these things record music?’, ‘There are some melodies I’d like to get down.'
In those days it wasn’t so simple, but having downloaded some software and spent £3 on a microphone I turned up the following week. We got organised, microphone down the back of the piano, Trevor all ready, I clicked record and off we went. Then, I’d no idea what Trevor was playing, just that they were some of the most haunting melodies I’d ever heard. 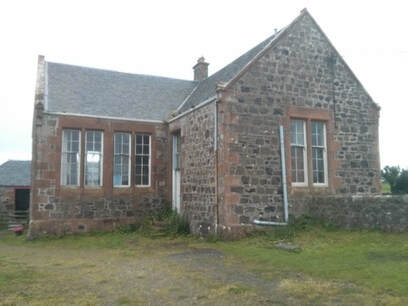 The Schoolhouse in Kingarth, now derelict
Trevor explained how he’d been evacuated during the war from Glasgow to Kingarth in Bute. He attended the school there where his mother became the headmistress. His music teacher sat Trevor on his knee and placed hands on hands whilst he taught Trevor the music.

The music teacher, Trevor told me, was an evacuee from the islands of St Kilda, St Kilda is a small group of islands off the West coast of Scotland 40 miles to the west of the Outer Hebrides.

Are they authentic? I’ve no idea.  Since then musicologists specialising in Hebridean music have confirmed the music has the lilt and modes of Gaelic song. Fiona Mackenzie , an archivist on Canna, hears elements in the music that connects with other recorded fragments of St Kildan song gathered during the 20th century, some from St Kildans and also from people from the Outer Hebrides.

So, what of Trevor? He was born in Camlachie in Glasgow in 1939. He taught English at Gordonstoun public school back in the 1960s when Prince Charles was there. Sometime later he was teaching in Saudi, Iran, Ethiopia, Kenya and Uganda. Trevor did mention to me his brushes with Idi Amin. Amin locked him up whilst he was a university lecturer in Kampala.

He mentioned he’d lived in Glasgow in Barlanark and Easterhouse and also worked for the ‘Glasgow Citizen’ and the ‘East Kilbride News’ newspapers.

The Lost Songs of St Kilda 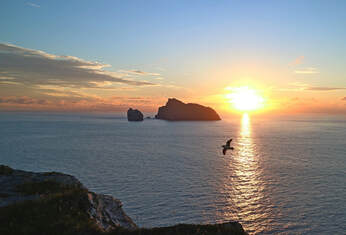 Sunrise from Hirta looking to Boreray and Stac Lee, 2018
The album and reorchestrations only came about by a wonderful twist of fate when Fiona Pope, who met Trevor after the melodies were recorded, landed a job with Decca records in their A and R department at the beginning of 2016.

Decca then commissioned several established composers to re-orchestrate Trevor’s tunes to accompany the original recordings.
The album exceeded expectations; it went straight to the top of the classical album chart. It became the Classic FM album of the year and is now the fastest selling posthumous debut album EVER.

I certainly miss Trevor but discovered he’s still capable of surprises. In researching his life for ‘Lost Songs’ talks I’m asked to do, I discovered he had lived in Camden, London where he was picked up ‘in a flashy limousine’ from his flat and driven to Clarence House to play for Her Majesty: The Queen Mother.